La Nucia is preparing to welcome, this Saturday, February 23rd, the best cyclists in the world. The third stage of the Setmana Ciclista Valenciana will start, at 13 hours, from the Ciudad Deportiva Camilo Cano. This Tuesday was presented at the seat of the Provincial Council of Alicante this event in the presence of the Deputy of Sports, Juanjo Castelló, the Sports Councilor of La Nucia, Sergio Villalba, and the president of Club Ciclista Escapada and director of the Setmana Ciclista Valenciana, Rubén Donet.

The stage that will start from La Nucia will be decisive to know the name of the winner of this edition of the international event, since after 110 km - and after climbing the port of Maigmó - it will finish at the top of Xorret de Catí.

After leaving La Nucia, in the Marina Baixa region, the cyclists will go to Benidorm and will go parallel to the coast to the Campello (l'Alacantí), passing through La Vila Joiosa. Busot, Mutxamel, Sant Vicent del Raspeig and Agost will see the runners pass before chaining the two demanding climbs.

"From the Provincial Government we are aware of the need to support this type of initiatives that represent an excellent opportunity to deseasonalize the demand, create employment, boost the economy and enrich our tourism and sports offer", explained the deputy Juanjo Castelló, who also highlighted that proposals like this "allow us to project the important role of women in cycling and to break down barriers in favor of gender equality".

For his part, Sergio Villalba took advantage of his speech to remember the close relationship that La Nucía maintains with sport and encourage all citizens to join this event "that despite its short history has become an international benchmark in this discipline "

Setmana Ciclista Valenciana will consist of four stages and a total of 440 km. There will be 176 cyclists distributed in 26 teams (21 foreigners and 5 nationals) that will tour the three provinces of the Valencian Community. Among them will be the last two winners of the race, the Danish Cecilie Uttrup Ludwig and the British Hannah Barnes. 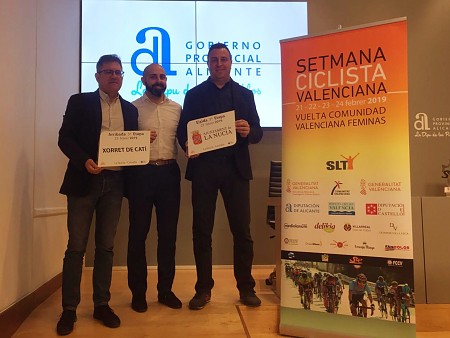